In our California Culture increasingly obsessed with Technology & Beauty, Keeping One’s Looks Intact and Being Completely on the Leading Edge of Everything, there is one Lady who Holds Her Distinctly Deco Demeanor, Style and Efficient Manner Far & Forever Above All the others…A Stunning RedHead, She Lives in San Francisco ~ 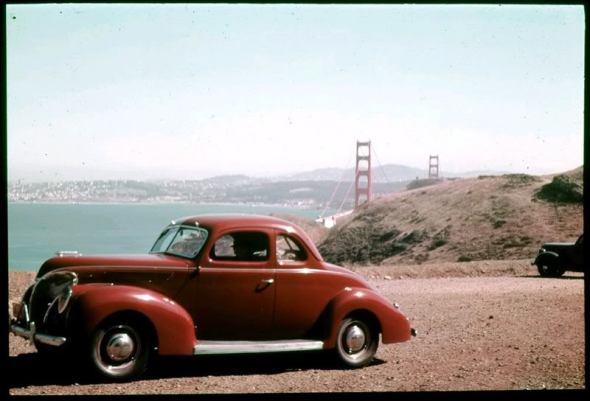 Fort Point has stood guard at the narrows of the Golden Gate for nearly 150 years. It has been called “the Pride of the Pacific,” “the Gibraltar of the West Coast,” and “one of the most perfect models of masonry in America.” When construction began during the height of the California Gold Rush, Fort Point was planned as the most formidable deterrence America could offer to a naval attack on California. 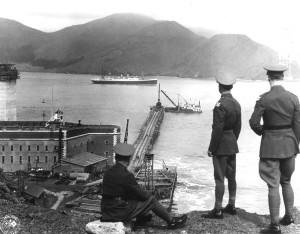 Although its guns never fired a shot in anger, the “Fort at Fort Point” as it was originally named has witnessed Civil War, obsolescence, earthquake, bridge construction, reuse for World War II, and preservation as a National Historic Site.

In 1916, more than four decades after railroad entrepreneur Charles Crocker’s call for a bridge across the Golden Gate Strait* (Strait) in 1872, James H. Wilkins, a structural engineer and newspaper editor for the San Francisco Call Bulletin, captured the attention of San Francisco City Engineer Michael M. O’Shaughnessy. O’Shaughnessy began to consult a number of engineers across the Country about feasibility and cost of building a bridge across the strait. Most speculated that a bridge would cost over $100 million and that one could not be built. But it was Joseph Baermann Strauss that came forward and said such a bridge was not only feasible, but could be built for $25 to $30 million.

Strauss was a prolific engineer, constructing some 400 drawbridges across the U.S. He dreamed of building “the biggest thing of its kind that a man could build.” In 1919, San Francisco’s city engineer, Michael O’Shaughnessy, approached Strauss about bridging the Golden Gate, the narrow, turbulent passage where San Francisco Bay meets the Pacific Ocean. Strauss caught fire with the idea, campaigning tirelessly over the next decade to build the bridge. He faced enormous opposition from the “Old Guard” — environmentalists, ferry operators, city administrators, and even the engineering community. Yet in November 1930, a year into the Great Depression, voters at last supported a bond issue for Strauss’ bridge. The ambitious project finally had its green light.

Strauss was the steadfast believer who organized the political, financial, and promotional efforts to build the Bridge. The time was right to span the Strait as population centers were growing and traffic congestion at the ferry docks was becoming intolerable. By 1929, motor vehicle travel via ferry had exploded, with demand exceeding available capacity. But there were no federal or state funds available to build a bridge because the construction of the San Francisco-Oakland Bay Bridge had already received the limited federal funds available.

Fort Point with The Golden Gate Bridge under construction ~ 1934

Plans for the construction of the Golden Gate Bridge also involved plans for the demolition of Fort Point. Fortunately, Chief Engineer Strauss recognized the architectural value of the Fort and created a special engineer arch which allowed the construction of the bridge to occur safely over it. During World War II, Fort Point was once again used as temporary housing for soldiers. Today the Fort is a National Historic Site, largely because of the Foresight of  Strauss.

Strauss alienated many people in his quest to build the structure — his first suspension bridge. Obsessed with claiming credit as the span’s creator, he minimized the acknowledgement given to Charles Ellis and Leon Moissieff, the two visionaries who actually worked out the significant engineering challenges of building the bridge. Strauss’ detractors blocked a statue of the chief engineer proposed for the bridge plaza; his widow would eventually fund its creation in 1941, inscribing it, “Joseph B. Strauss, 1870-1938, ‘The Man Who Built the Bridge.'”

During the bridge’s construction, Strauss started to feel unwell, both mentally and physically. He disappeared for more than six months — causing rumors to spread that he had suffered a nervous breakdown. During this time, Strauss divorced his longtime wife and married a young singer, many years his junior.

On May 27, 1937, the bridge opened to the public. Returning to his other great love, poetry, Strauss composed verse for the occasion, exulting, “At last, the mighty task is done.” It would be the last mighty task of his life. Exhausted, Strauss moved to Arizona to recover. Within a year, he would die of a stroke.

The Recent Economic Times may remind one of the Days in the Depression when the Golden Gate was built. In all of the Technology we enjoy today, all the iPods, iBooks, iPads, and iPhones filling the Airwaves, Hollywood Special Effects and Carbon Fiber all being Creations of California ~ There was a time when Everything Technological was Built with Pure Blood Sweat & Tears. All Steel. 80,000 Miles of Hand-Wound Wire make up the Lengths of Cable that Suspend the Golden Gate Roadway. Built By Men By Hand. There is a saying that The Coldest Winter in California is a Summer in San Francisco. Now imagine getting up & going to Work for 4 years, Day In-Day Outdoors suspended High Above that Icy Bay with nothing but inches of Wet Steel and Slick-Bottom Boots between You & Your Demise. Eleven men died during the Bridge’s construction. Until February 17, 1937, there had been only one fatality, setting a new all-time record in a field where one man killed for every million dollars spent had been the norm. On February 17, ten more men lost their lives when a section of scaffold carrying twelve men fell through the safety net. Going to work in those conditions ~ Never to Return Home.

The most conspicuous precaution for Bridge Workers was the safety net, suspended under the floor of the Bridge from end to end.  During construction, the net saved the lives of 19 men who became known as the “Half-Way-to-Hell Club.” 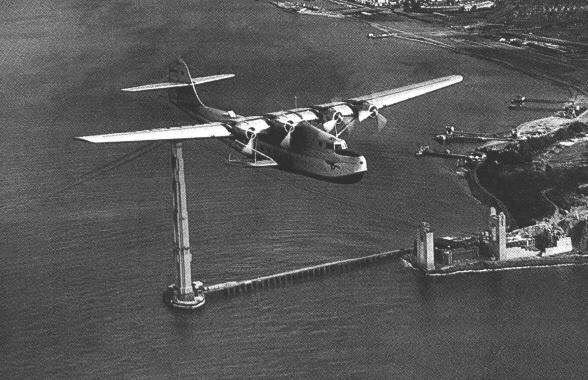 At last the mighty task is done;
Resplendent in the western sun
The Bridge looms mountain high;
Its titan piers grip ocean floor,
Its great steel arms link shore with shore,
Its towers pierce the sky.

On its broad decks in rightful pride,
The world in swift parade shall ride,
Throughout all time to be;
Beneath, fleet ships from every port,
Vast landlocked bay, historic fort,
And dwarfing all–the sea.

To north, the Redwood Empire’s gates;
‘To south, a happy playground waits,
in Rapturous appeal;
Here nature, free since time began,
Yields to the restless moods of man,
Accepts his bonds of steel.

Launched midst a thousand hopes and fears,
Damned by a thousand hostile sneers,
Yet ne’er its course was stayed,
But ask of those who met the foe
Who stood alone when faith was low,
Ask them the price they paid.

Ask of the steel, each strut and wire,
Ask of the searching, purging fire,
That marked their natal hour;
Ask of the mind, the hand, the heart,
Ask of each single, stalwart part,
What gave it force and power.

An Honored cause and nobly fought
And that which they so bravely wrought,
Now glorifies their deed,
No selfish urge shall stain its life,
Nor envy, greed, intrigue, nor strife,
Nor false, ignoble creed.

High overhead its lights shall gleam,
Far, far below life’s restless stream,
Unceasingly shall flow;
For this was spun its lithe fine form,
To fear not war, nor time, nor storm,
For Fate had meant it so. 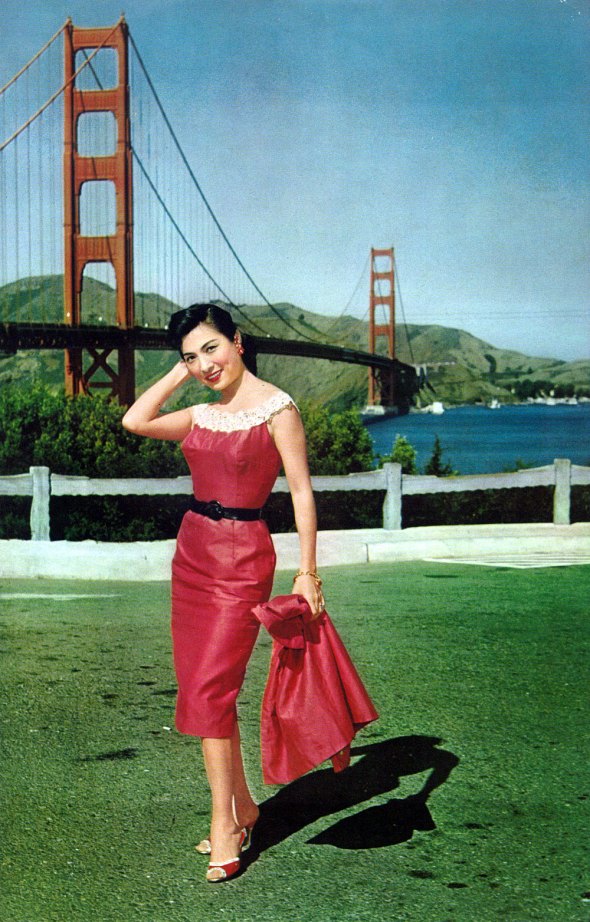 Out of the Great Depression, Franklin Roosevelt created the Works Progress Administration, putting Millions of Idle Americans Back to Work to Create some of the Most Enduring Examples of Americana. The Golden Gate Bridge is A Shining Art Deco Triumph of Design and Engineering Execution – Perfectly Spanning the Glorious Golden Gate & Bisecting Nature with a Man-Made Masterpiece of Timeless Design & Efficiency. When one thinks of one Iconic Symbol Synonymous with California ~ The Golden Gate is truly the Grande Dame ~ 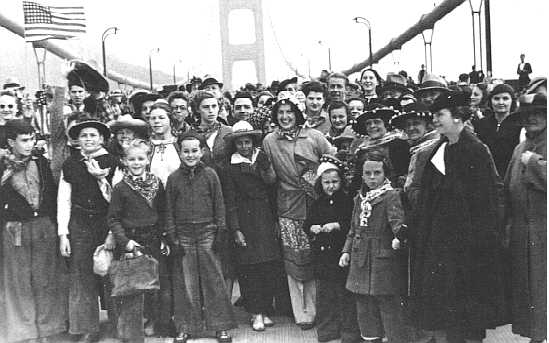